Returning from a visit to Japan, Executive Chef Richard Triptow has decided to spice up the menu at Dallas Fish Market by bringing in some Asian influence.  We were invited to try out some of his new culinary creations as well as some new cocktails from the bar.

We got started with a pair of cocktails, the Deep Ellum and the Lotus Blossom Sangria.  The Deep Ellum had Citrus vodka, violet liqueur, and splash of club soda.  It was lightly carbonated with light citrus flavor from the vodka.  It had a very strong vodka taste.  The Lotus Blossom Sangria had Zizpang Sparkling Sake, St. Germain, lemon juice, and seasonal fruits. It had a strong sake taste with light carbonation and a touch of citrus flavoring.  It was refreshing and smooth, a great cocktail.

For our appetizer, we started off with the Shrimped Tempura, two delicious pieces of grilled shrimp covered in shredded pieces of tempura.  They were light and texturally balanced, with a little spice coming through from the Jalapeños in the pico de gallo.  An excellent way to start a meal with great seafood while leaving plenty of room for more. 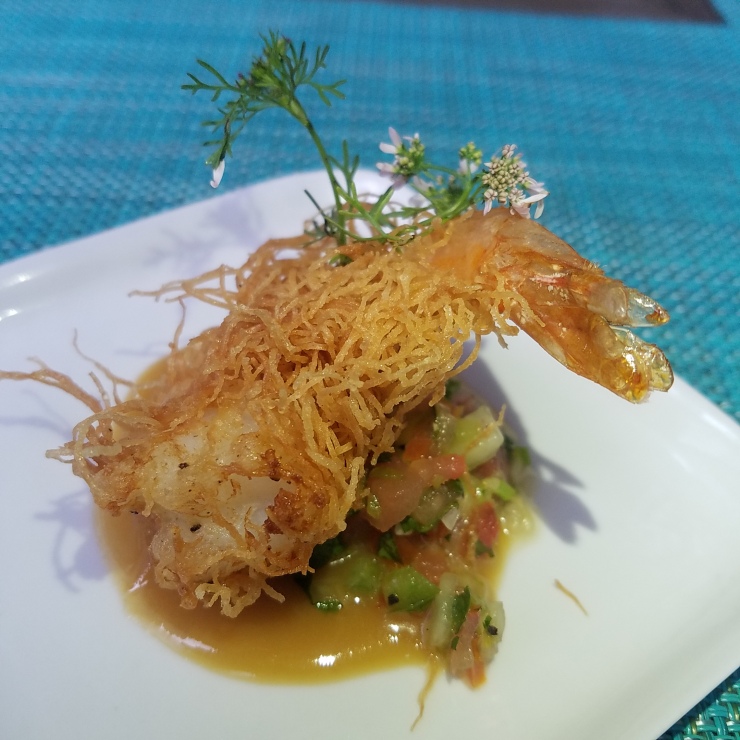 We also had the Lump Crab Cake, a large, wonderful crab cake with oyster mayo, cilantro pesto, and a jalapeño-fennel marmalade.  This was a phenomenal dish, the crab cakes were delicious, the may and marmalade really spruced up a traditional dish.  A great way to get started here. 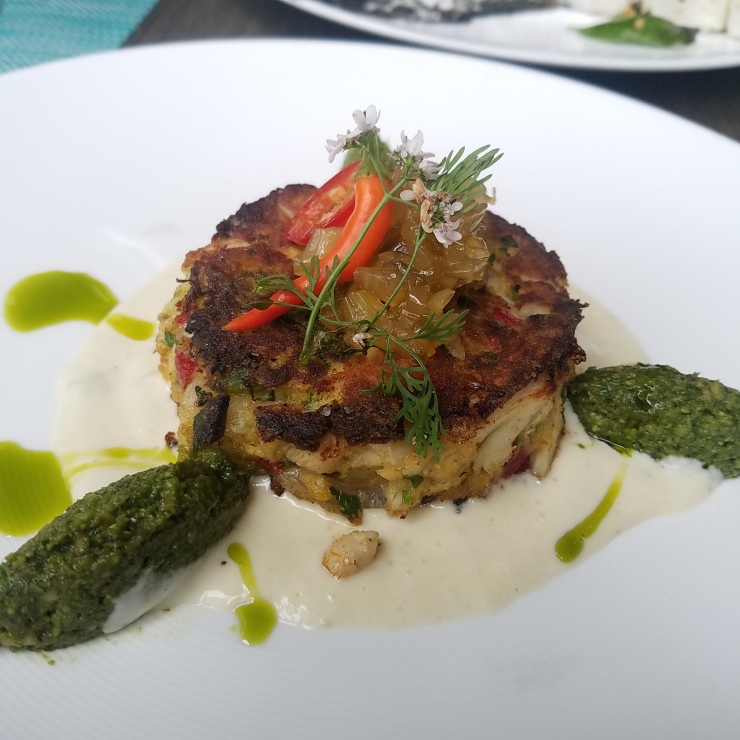 Next out was the Taiwan roll.  It had marinated shrimp that were wrapped in soy paper with cucumber and peanuts. Light and refreshing with seeds on the outside of the rolls.  It was an interesting roll that mixed shrimp with garden and earth flavors.  Original and unique.

Four our main course, we had the Ginger Miso White Soy Swordfish and the Palacios, Texas Redfish.  The Swordfish was served over basmati rice with cashews and a green apple curry nage.  This dish was amazing.  The thick slab of fish was sweet with a moist, meaty, and hunger satisfying heartiness to it.  Mixed with the rice and other flavors, the entire dish was great.

We also had the Texas Redfish, which came with baby bok choy, warm brown butter dashi, mushrooms, and a soy-yuzu glaze.  The bok choy was wonderfully cooked, crisp and delicious.  The fish was a mild, sweet flavored fish, lighter than the swordfish.

For dessert, we had a item not on the menu:  Black Seasame Icecream.  An inspired ice cream from his travels, we were certainly eager to give it a shot.  Teasing the ice cream alone, it was just a little sweet, but with an unusual taste to it.  Not like any ice cream we had ever had.  The key, however, was taking a full bite.  Inside the cone is a dollop of citrus cream.  The cone, plus the lemon flavoring, plus the ice cream, all in one bite, went very well together.  Certainly worth trying! 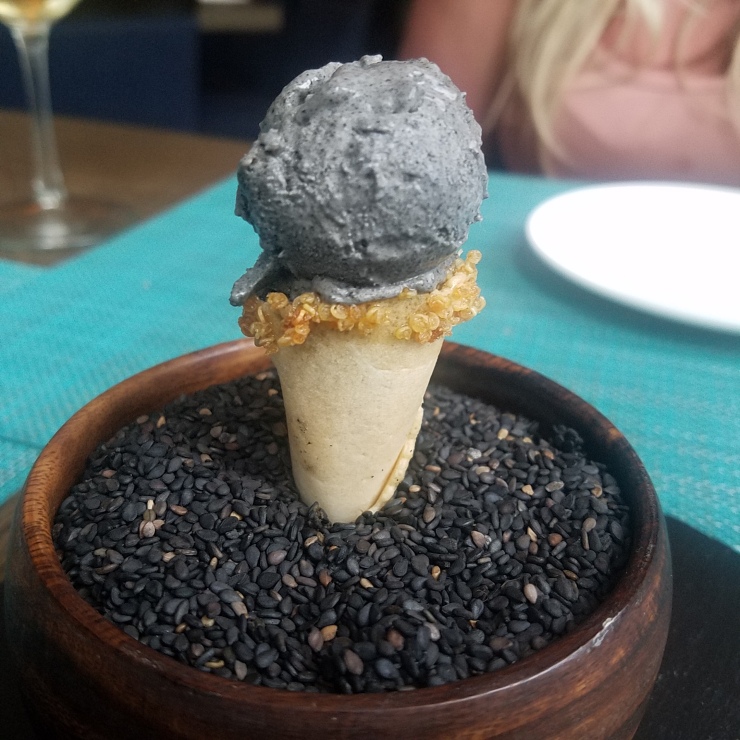 After the ice cream, out came the speciality dessert, the Beet Garden.  This dessert is like going on an adventure to the Secret Garden.  For those who love earth flavors and beets, this is your dish.  Beet ice cream, citrus dollops, and beets make each bite so culinary surprise.  The originality of this dessert, not to mention the visual presentation, makes it a must try.  There isn’t anything like it that we have come across. 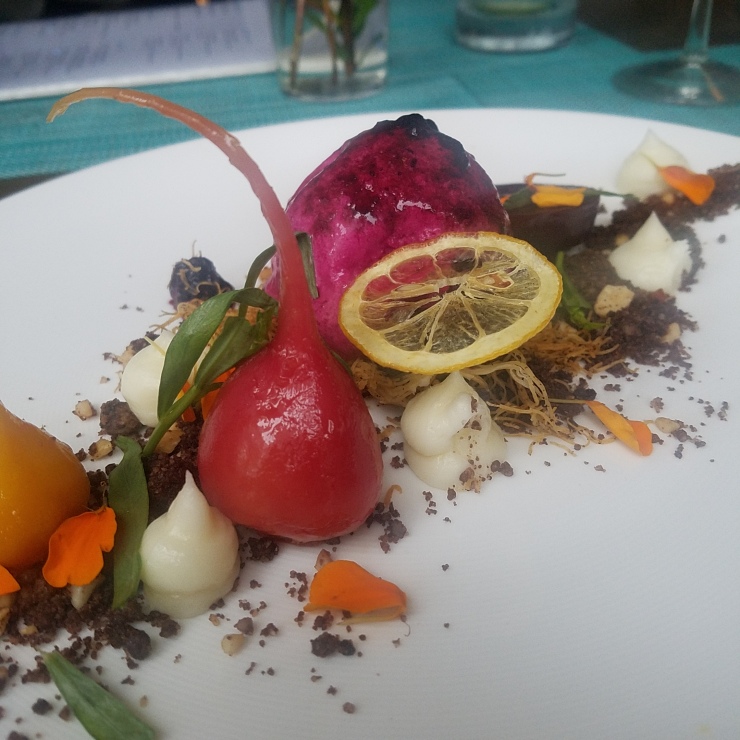 There’s one thing you can be certain about when you make your way to Dallas Fish Market:  you are in for a treat!  Great seafood dishes and some incredibly original and unique desserts await you at this downtown Dallas restaurant.