Every year, Shake Shack kicks of its Great American Shake Sale. This year’s event goes from May 1st to July 31st. During this time, you can donate $2 to the No Kid Hungry charity, and in return you will get a card for a complimentary hand-spun shake, including the new shakes that will be available only during this charity drive. The new shakes are the Red Velvet Cake Shake, the Brownie Batter Shake, and the Cinnamon Dulce De Leche Shake.

To date, Shake Shack has helped raise $1.7 million. This year, the goal is $500,000. One hundred percent of all donated money goes to the cause, so not only are you getting an original, hand-made shake, but you have the satisfaction of knowing that all of your donation is going to helping those in need.

The first shake we tried was the Red Velvet Cake Shake, a vanilla frozen custard blended with cream cheese-frosted red velvet cake and topped with whip cream. A creamy blend of cake and custard, this shake goes down smooth. An entire slice of Red Velvet cake is mixed in with the frozen custard to create this amazing shake. This was my favorite of the three shakes. 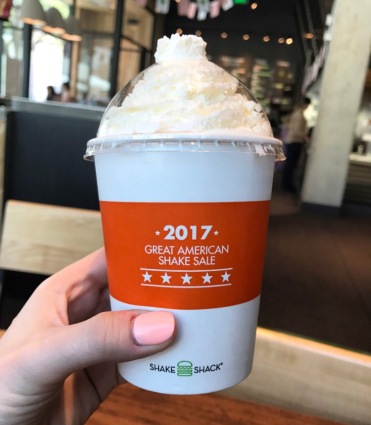 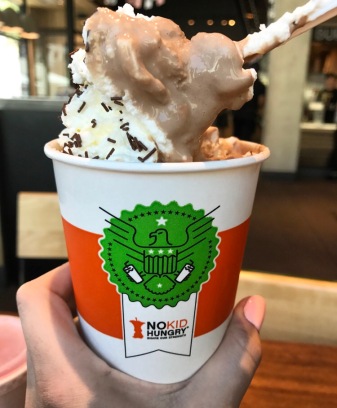 Last out was the Cinnamon Dulce De Leche Shake, a Vanilla frozen custard blended with dulce de leche and cinnamon, topped with whipped cream and cinnamon cream. This shake tasted exactly like Cinnamon Toast Crunch. This shake is sure to conjure up some childhood memories of eating cereal and watching Saturday morning cartoons! 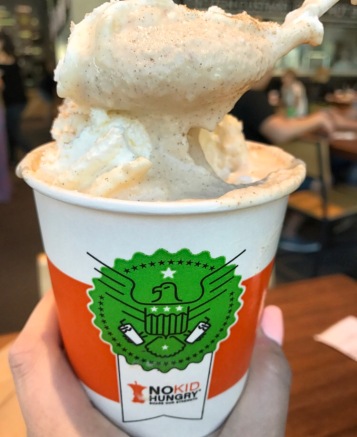 Whether you’re a chocolate lover, a red velvet lover, or you’re just feeling nostaligic and down for Cinnamon Toast Crunch, these new shakes are sure to hit the spot.  Drink shakes for charity and be happy!